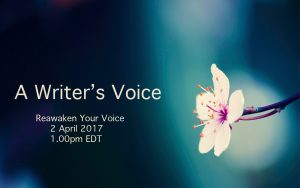 I recently taught a class on SavvyAuthors. I called it Voice on the Page. The goal of my five-week class, which took place through a live webinar each week, was to get the writers who joined me to really write the story they absolutely believe in. The story that comes from their voice, not from craft. Craft is important and necessary. But with so many classes on craft these days, overuse has made it the vine that kills the tree. Your voice is the tree, and it is unique.

From my writers I learned that they longed to be inspired by their voices again. They taught me that writers are looking for validation of their voice, without throwing out the necessity of craft.  Does this sound like you?

— Were you once thrilled to write your story but no longer feel connected to your voice?

— Do you feel faraway from the original vision you had for your story, and why you wanted to write it?

— Are you exhausted from the effort of trying to nail every craft point and push every plot twist to make your work fit the market?

If these, and more that I learned from the strong writers who studied with me on SavvyAuthors, ring true to you; if want to find joy in your writing, and trust your voice again:

The webinar will last 30-45 minutes, depending on how many people join. I invite you to

REAWAKEN TO YOUR VOICE

To join me on the webinar on April 2,  fill out the contact form HERE  and your place will be confirmed. (If you can’t attend you’ll receive a copy of the recording.)

A constant focus on craft will make your work feel as if your voice is no longer present in your writing, and perhaps it is not. But it is not lost. It is still with you. And Spring is the perfect time to bring your voice back to life again.

WHAT PARTICIPANTS SAID ABOUT VOICE ON THE PAGE

Brilliant analysis. Thank you so much. I admit I have gotten away from my origins, wordsmithing, in favor of trying to hit all the targets we are told to nail this way or that. It’s exhausting. I feel like I can never just sit down and craft. There are always a billion balls to juggle. Appreciate you and the time you took to delve into this. Helps so much.
Thank you so much for this class and all the effort you put into helping us. I truly appreciate you and your point of view. It’s been enlightening and lovely. Hope to connect again soon. Shanda M. Voice on the Page participant, SavvyAuthors 2017

This was a fantastic class! Thanks to Shelley I had some major breakthroughs. I have always struggled with revisions, and in her class I realized it was because I didn’t trust myself as a writer. With her gentle guidance, I found my inner voice again. Telling the story I want to tell, the way I want to tell it, has brought joy back to the writing experience for me! It’s been so wonderful to approach revisions with excitement, and not the dread I used to have. Wonderful class! India P. Voice on the Page participant, SavvyAuthors 2017

AFTER THE WEBINAR, WHAT NEXT?

If you would like to go further into reawakening and deepening your writing voice, you will be able to sign up for a group session limited to fifteen writers. The cost of the session will be $25 per writer and will last approximately two hours (depending on how many writers sign up). You will be asked to send in the first two pages of a current work to discuss with me during our time together.

Much of my work with writers is informed by twenty years of working with actors, who bring everything to the rehearsal room. My job then was to find the seed of what was the most important thing, the most authentic thing, in what the actor wanted to bring to the character, to keep building on that seed, and to jettison everything else. This is very much the way I approach my work with writers. Except that instead of the acting seed—what I am most interested in for writers is for them to really write the story they absolutely believe in. And to jettison everything that is unimportant and inauthentic to their vision and voice.

If you feel your knowledge of craft has created a split between you and your vision, if you want to get back to writing with your voice, without having to throw away your hard-won knowledge,  please join me on Sunday, 2nd April 2017 at 1.00pm Eastern Daylight Time.

Isn’t it time to be in control of your writing again?

I look forward to speaking with you and send you Spring’s joy.

P.S. If you are new to writing, you are welcome to join the webinar.

To find out more about me go here
To join me on the webinar on April 2, or to receive a copy of the recording, fill out the contact form HERE 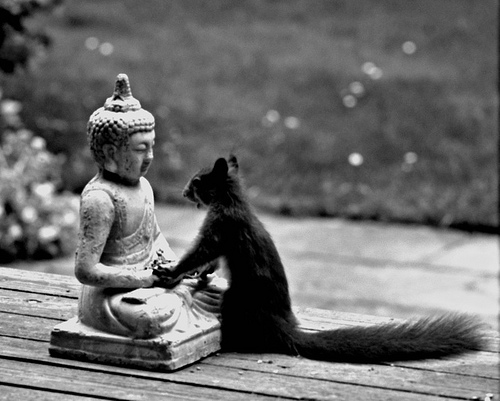 In the summer of 1985, I was invited to stage a play-in-progress at the Bay Area Playwrights Festival. It was a momentous occasion: a collaboration by three leading playwrights in the Asian American community, it was one of the Festival’s highlights.

If you’ve ever tried to get one writer—let alone three writers—to finish a creative project on time, you’ll have an inkling of how this gig played out.

Now that I have returned to writing after a career in theatre—where the curtain goes up, ready or not—I understand why writers procrastinate even if they were burning with inspiration the day before. Because inspiration is like a firefly: you catch its beauty in the moment and then, it’s gone. Winked out as if it never was. Unlike theatre, we have no props or sets to simulate reality for us. We have nothing but words.

The following summer, the director of the Festival invited me to return as a co-director of a workshop for emerging playwrights. Over the course of two weeks, I co-led the project to facilitate the creation of short works by the playwrights and to stage them on the last weekend of the Festival.

I no longer remember what any of the pieces were, but I vividly recall an exercise that called for the animation of items in a refrigerator. The writing was fresh across the board. The refrigerator characters displayed all the peevish unpredictability of human captiousness or the nobility of human magnanimity. They were by turns hilarious and poignant, menacing and courageous.

The writing was fresh in part because people wrote from a stance of “Game on!” But it was also fresh because the exercise was unexpected. It came out of the blue, and on a day when everyone was ready for “Game on!” creativity.

I am not an advocate of writing prompts though I know many writers who love them. I find they stifle my imagination; but more important, they stifle my voice. Like the taste or texture of certain foods, the appeal and draw of such exercises is purely personal. What appeals to one writer is anathema to another. I’ve taken classes and been in groups where prompts were the primary means of eliciting stories from participants. In the end, they never took me farther than the idea I’d manufactured to fit the prompt.

I want my work to breathe with its own rhythms and cadences, to find resonance with readers, to be alive. For me, that means working from the inside out, not from the outside in.

I imagine a writer who loves prompts could argue, “Well, you take the seed of what you created from the prompt and bring it to life.” Fair enough. I have something to say about seeds a little later on. But this particular way of generating one doesn’t work for me. It doesn’t give me access to my voice.

One thing I’ve known about myself, from the time when I was old enough to understand such things, is that I have a writer’s voice. I may never write brilliantly, but I will always write with a voice that no other writer has.

I thought I would grow up to become a playwright. Instead, when I grew up, I became a theatre director. Directing is not my forte. I don’t have the kind of personality that does well with large groups of people in need of a therapist. Directing is as much about keeping track of everyone’s mental health as it is about presenting the playwright’s vision of the play.

Although I was never keen on being company therapist, I did love working with actors. In reality there’s no such thing as a lazy actor, only an arrogant person who believes they don’t have to work as hard as everyone else to make the production a success. If you’ve never spent time in a rehearsal room, actors are extraordinary. Writers have a difficult time with rejection letters; but an actor is often rejected before they can utter a word in the audition because they’re the wrong physical type.

(If you haven’t seen Tootsie, I recommend it. Also Dustin Hoffman’s interview on why he made the film: https://www.youtube.com/watch?v=xPAat-T1uhE)

Actors are extraordinary because they always bring everything possible to the character. In early rehearsals most of what they bring doesn’t work. The actor knows this and the director knows this. The secret is to jettison what doesn’t work and build on the kernel that does.

Underpinning everything that comes together to make up our story—those characters and settings, landscapes and themes—is our voice.

Voice is the least understood aspect of writing because it cannot be defined. When agents and publishers say, “I don’t know what I’m looking for but I know it when I see it,” they’re referring to the writer’s voice.

Because voice is impossible to define, sometimes you’ll read or hear someone say, “Either you have it [voice] or you don’t.” I read this recently as a reply to a post on a well-known literary agent’s blog. Well, I’m here to tell you that you have voice whether you like or not, and whether you believe me or not.

I’m also here to tell you that your voice is impossible to pin down because it is nothing less than the content of your heart and mind and soul.

Remember that seed in the rehearsal room I mentioned earlier? That seed was the character’s heart and mind and soul the actor wanted to access, in order to bring the character to life in performance. That seed is what makes us unique. It is the reason no one can tell you: “Your voice is wrong.” Your story’s narrative voice may be wrong for the story, but your voice can never be wrong.

If you junk everything else in this post as “not for me,” remember this one thing and you’ll be ahead of the game: Your voice can never be wrong. Never.

I haven’t said much about a writer’s voice because I want you to listen to your voice—to your heart and mind and soul—to tell the story only your voice can tell. Sometimes that story begins with a personal blog post. Sometimes it begins with “Once upon a time.”

However it begins, let it begin with your voice. Because your voice is never wrong.